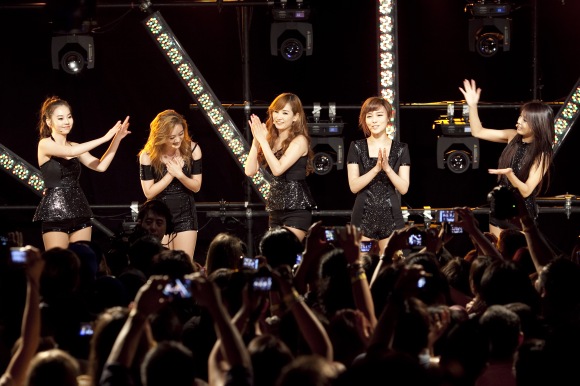 For our conventional gigs, it’s a difficult line to play what is already on mainstream and what is not yet on the charts. Clear Channel/iHeartRadio have made the job easier for us by coming half way.

Earlier this week, the Wonder Girls performed a show in New York for die-hard fans. If you were looking for an example of mainstream media endorsing kpop in the west, this is it. Organized and sponsored by iHeartRadio, it was a nicely produced concert for our favorite seoul-pop gals. The Korean group’s latest collaboration with Akon “Like Money” (our exclusive video featured above) brought the girls within the billboard top #100. Our speculative non-statistically-significant analysis finds that “Like Money” also goes over well with American Kpoppers. As DJ’s, lets give them a bump through our own miscellaneous radio and event gigs.

Because Kpop doesn’t sell itself without aesthetics, we’re sharing some stunning photos provided by Sara Kauss/Getty Images for iHeartRadio below. Click for full-resolution.

Editor’s note: We’ve started to hear “Like Money” on Bay Area station 99.7 Now. If you’re a Bay Area local, be sure to tune in and request the song. If you’re a 99.7 mix Dj, throw it into your sets.